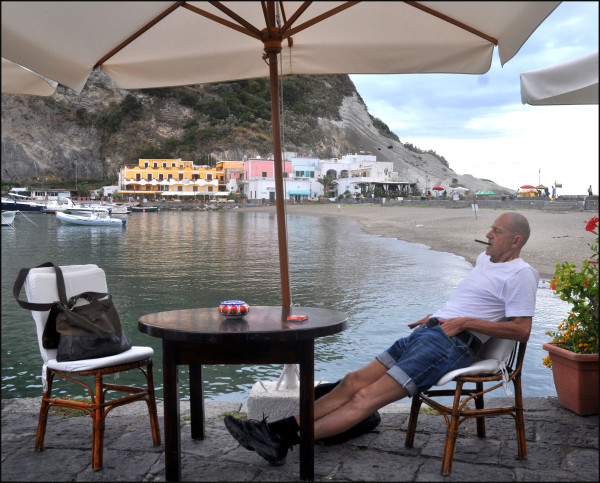 When I’m in the mood I’ll join my friend Captain Antonio on one of his charter boat expeditions. He always calls me whenever some Americans or Brits or Aussies sign up because his English is not so hot, and he likes it when I consent to play the role of tour guide. 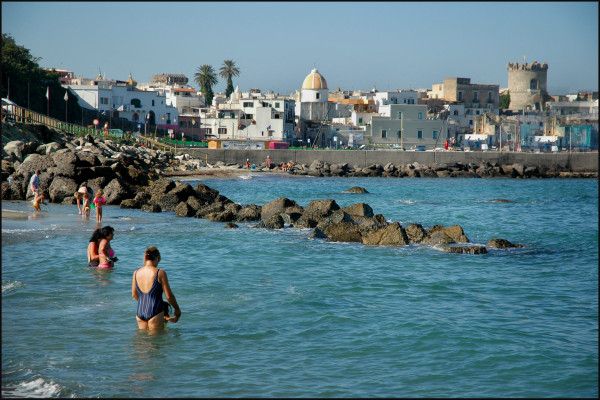 We usually start from his yacht’s slip in the harbor of Lacco Ameno, and we head westward following the shore. I brace myself against the mast, and point to the white bell tower in the village. I tell my captive wide-eyed audience sitting cross-legged on the deck that in the nearby museum of Villa Arbusto is the famous Cup of Nestor, upon which appears one of the earliest examples of alphabetical language, invented by the Greeks to preserve the oral epics of Homer. I tell them that the scratched poetic lines on that 800 BC funerary relic are in fact a sex spell: 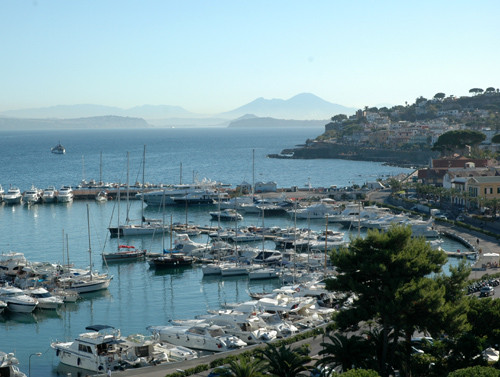 We go around Punta Caruso, along the umbrella-covered beach of San Francesco, and eventually approach the Forio skyline. There is a gray stone cylindrical tower called torrone, which was built in 1480 to defend against invading pirates. Later it was a prison. These days the lower floor is a gallery where local artists display their work, and the upper level is full of mediocre white stone sculptures. The yellow dome is that of the church of San Gaetano. On the arch above the altar is a Latin inscription, PAVETE AD SANCTUARIUM MEUM, meaning Revere my Sanctuary. It’s from the bible. 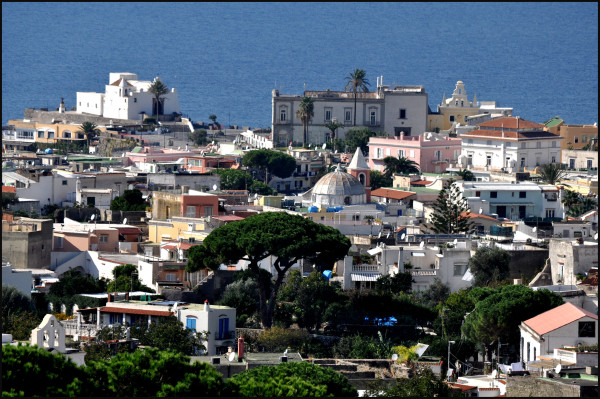 Further along is the beach of Citera, named after Cythera, the Roman goddess of love, and we move past a series of partly submerged rocks off the port side. I tell my attentive tourists that all of them have names, and stories as well. For instance there is pietra bianca and pietra nera, white rock and black rock. Eons ago they were a young couple deeply in love, trying to swim to shore. But angry Jupiter turned them into stone. This myth represents destiny, or the hand of fate from which no one escapes. Some may think the lovers are suffering in their immobility, but it was really Jupiter’s precious gift.

How so? someone asks.

Well, they were frozen in place when their relationship was fresh and exciting, long before it had a chance to fade or fall apart. The two lovers are bound forever in sweetness. 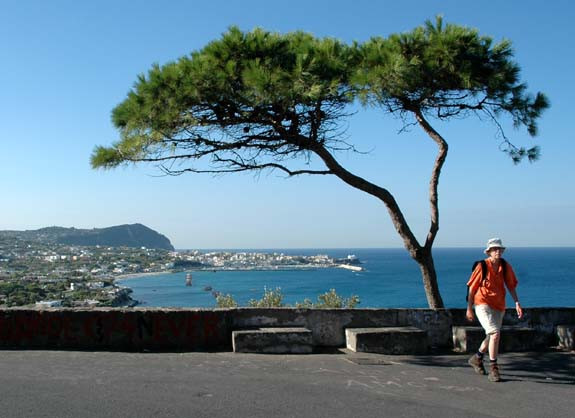 By way of a self-referential aside, before I ever set foot on Italy my intellectual arrogance and hubris brought me to question the description of the volcanic cloud rising from the peak of Vesuvio by Pliny the younger in his famous letter to Tactitus in AD 79. "I can best describe its shape," he wrote, "by likening it to a pine tree. It rose into the sky on a very long 'trunk' from which spread some 'branches.'"

Well, I knew there had to be some serious error in the Latin translation here because pines, as we all well know, have branches that are wide at the bottom, and they rise up to a point. At Christmas time we put a star up there.

And then years later, I got my very first live view of Italy. The plane landed in Pisa, and out the window of the bus I saw a dirt road flanked by some strange and lovely trees that had long narrow trunks with a sideways oval of dark green at the top. I asked my new Italian companion what kind of tree that was. "Pine," she said. Oh, well, I thought. Pliny was exactly right after all.

Anyway, at the base of Punta Imperatore is the famous Posiedon Spa. This was the area where, in 500 B.C., a large white marble statue of Sappho was displayed. Back then she was a poet as respected and admired as Homer. Plato called her the fifth muse. She was one of the first to write from the first person point of view, describing love and loss as it affected her personally. One of her lines was, “Go, and be happy, but remember whom you leave shackled by love.”

Invariably someone asks me what brought me to Isola d’ Ischia. Sometimes I reply that I left America in disgust when the Supreme Court decided that George Bush, clearly a moron, was our new president, despite the fact that Al Gore had gotten more popular votes. Other times I say I needed to put a great distance between me and a long string of failed romantic relationships and other troubles, because I just couldn’t stand any more heartbreak. An advantage of living in solitary exile, I usually add, is that I’m less likely to hurt anyone, and thus spare myself the inevitable and painful four-fold Karmic payback.

Or I say that my original intent was to visit this lovely place for just two or three weeks to do research for a book, but when the boat pulled into the harbor, I was transfixed and knew I had to live in Forio, and no where else. So here I am, and here I’ll remain forever. I live in the lower part of a two-story vineyard’s villa on the slope of Mt. Epomeo, a dormant volcano. From my front door I see a splendid panorama of the entire west side of the island, with the Sphinx paw of Punta Imperatore to the left, and Punta Caruso to the right. Far below is a scattering of pink, peach, white and blue blocks of villas with terra-cotta tiled roofs, surrounded by umbrella pines, palms and olive trees. The Moorish architecture of the church of Santa Maria del Soccorso, atop its promontory jutting into the sea, glows bright white. Here comes the hydrofoil ferry from Napoli; it approaches the jetty, enters the harbor, and slowly settles into the water.

Rows and rows of grapevines are on a succession of stepped terraces on the slopes of the mountain, and in the garden there’s an abundance of lilies, angel trumpets, roses, and various species of cactus. In springtime little speckled green lizards dart across ancient rough-hewn walls of green volcanic tuffa, followed by an island-wide explosion of yellow wood sorrel. Fragrant wisteria, bright red and purple bougainvillea, quince, morning glories, honeysuckle and lilac hang from numerous arbors and trellises at the cafes in the village. You may sit in the sun and take your morning espresso as white clouds move slowly in the sky and bees buzz and little cabbage white butterflies flutter.

In good weather at dawn I walk along a path that gives me a view very similar to the landscape in the great movie, Il Postino. The breeze rustles the slender leaves of bamboo-like cane stalks that arch over from each side, forming a living green cave. The sound of the wind-blown leaves is exactly like that of a light summer rain. I go down steep stone stairs through a tangle of undergrowth to the main road, and down switchbacks to the beach. The place is deserted at that time of morning, and I swim for about a half hour, alone, in the clear cool emerald Mediterranean.

When I return I take a cold shower, dress, go to my office and fire up my computer. I read The New York Times, The Washington Post, The Los Angeles Times, and a number of progressive blogs, and I check my email. And when I’m caught up in my correspondence, I resume work on my book At noon I shred some water buffalo mozzarella and mix in sliced tomatoes and basil plucked fresh from the garden, and sprinkle on virgin olive oil and salt and pepper. Fragrant, delicious, satisfying. Then a half-hour nap on my deck chair outside. When I awake I make espresso then return to writing. 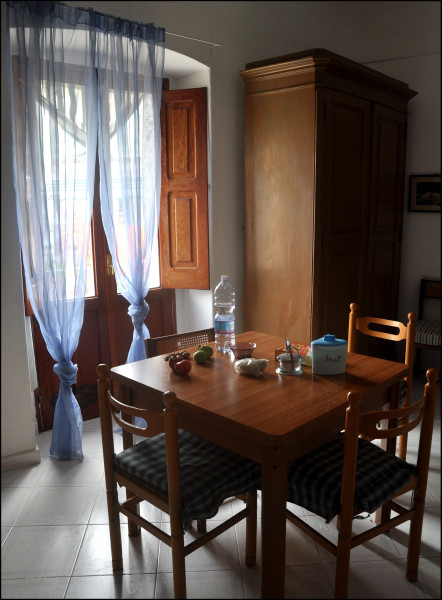 Dinner might be spaghetti with delicate tomato or pale yellow egg yolk and cream-based formaggio sauce, or a broiled white fish I bought directly from one of the fishing boats at Forio Porto. From time to time Colomba, my landlord’s wife, brings me covered dishes of lasagna or ziti with big meatballs or green pepper omelets she has prepared just for me. Nonna, the big cheese of the family, fears that my bachelor’s diet is inadequate and needs to be supplemented. After dinner, perhaps an old movie on the Classics channel on Italian Sky TV. Like Sunset Boulevard. Or a more recent one, like The Talented Mr. Ripley. Which they filmed here, and on the nearby island of Procida. Then to sleep.

The next morning, I do it all again. I’m in a storybook Mediterranean paradise. My home. 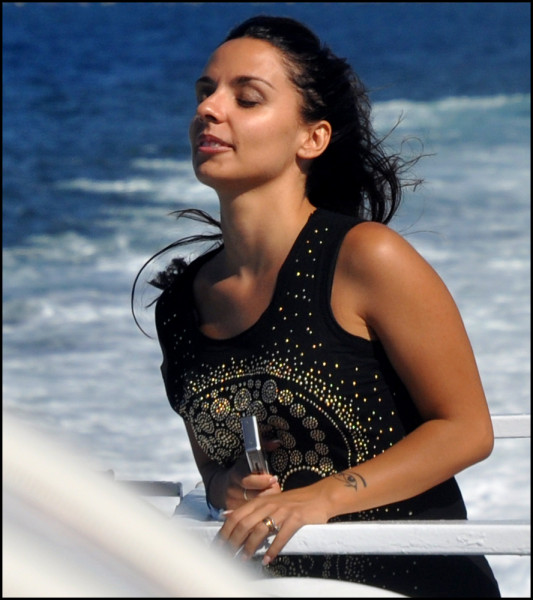 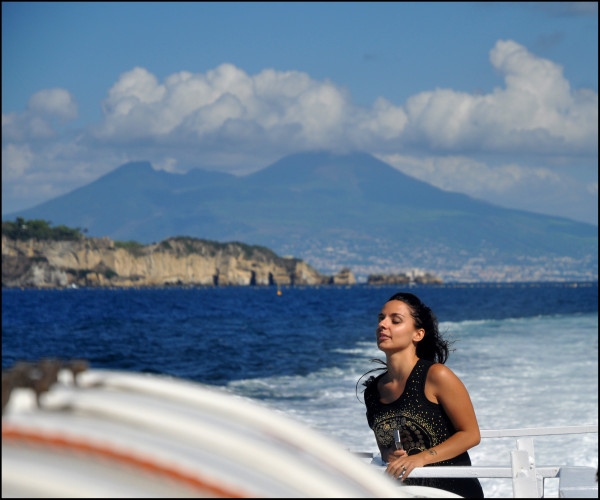 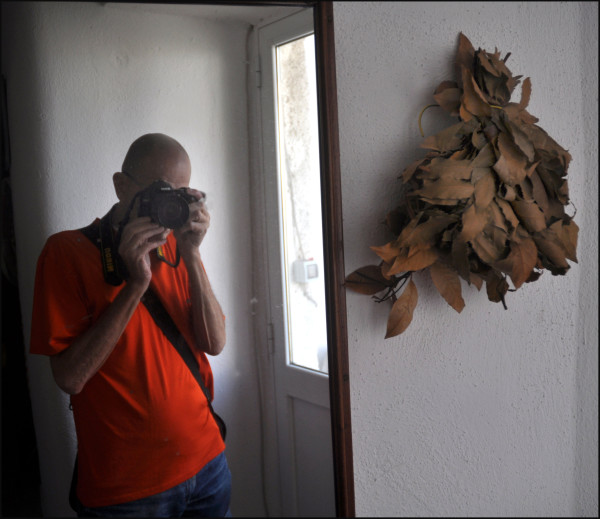