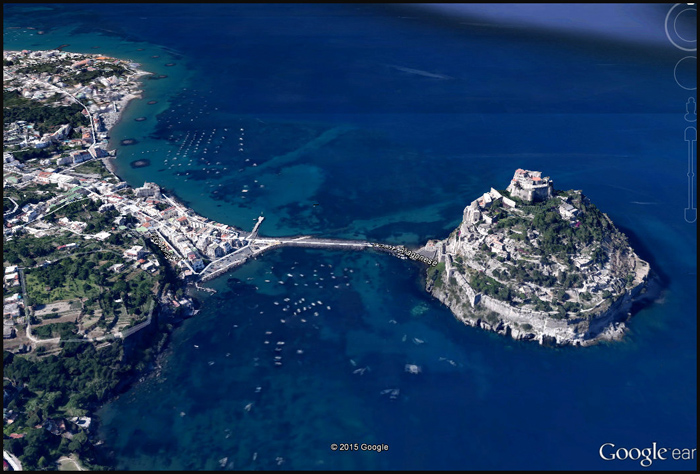 Wiki: The Aragonese Castle which stands on a volcanic rock, is the most impressive historical monument in Ischia, built by Hiero I of Syracuse in 474 BC. At the same time, two towers were built to control enemy fleets' movements. The rock was then occupied by Parthenopeans (the ancient inhabitants of Naples). In 326 BC the fortress was captured by Romans, and then again by the Parthenopeans. In 1441 Alfonso V of Aragon connected the rock to the island with a stone bridge instead of the prior wood bridge, and fortified the walls in order to defend the inhabitants against the raids of pirates. Around 1700, about 2000 families lived on the islet, including a Clarisses Convent, the Abbey of Basilians from Greece, the Bishop and the Seminar, the Prince with a military garrison. There were also thirteen churches. In 1809, the British troops laid siege to the island, under the French command, and shelled to destroy almost completely. In 1912, the Castle was sold to a private owner. Today the castle is the most visited monument of the island.