In a book entitled ENCHANTED ISLAND written in 1954 by a churchman and pedant named Walter Lowrie, he talks about an oil portrait of Vittoria Colonna by Jules LeFevre, an artist of the late 1800s. He says he got the portrait from his father-in-law, and then he decided to donate it to a library that adjoins the Church of S. Antonio da Padova in Ischia. Of the painting Lowrie wrote: "The artist...used a model who, fair as she was, obviously lacked the intellectual and spiritual qualities of Vittoria." The painting can be seen in the photo above, to the right of the door.

Need I say I disagree with Lowrie’s elitist perception? 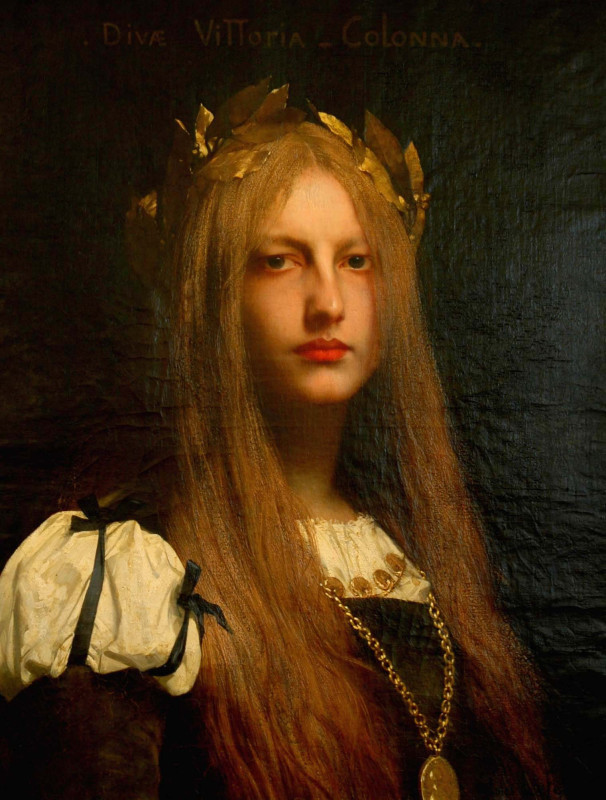 The reading room of the library was gradually filling up with people for a lecture on the works of Anna Maria Ortese, among Italy’s best regarded contemporary writers.

Here’s a biographical sketch from the literary journal Archipelago:

Anna Maria Ortese was born in Naples, in 1914. Her first book, a collection of stories published in 1937, was acclaimed as the work of a major new magical realist. (The critical phrase “magical realism” was largely the invention of the writer Massimo Bontempelli, who is also credited with having discovered Ortese.) She has written more than a dozen volumes of stories, novels, and essays, and has been the recipient of Italian literary prizes, among them Strega, the Premio Viareggio, and the Fiuggi. Although for fifty years her writing reached relatively small audiences, her most recent works have appeared on the Italian bestseller lists. In 1986, her novel, THE IGUANA, appeared in an English translation by Henry Martin, published by McPherson & Company, who also publish two volumes of Ortese’s stories under the title A MUSIC BEHIND THE WALL, the second volume of which appeared in 1998. “The Great Street,” a story, appeared in ARCHIPELAGO, Vol. 1, No. 1. Anna Maria Ortese died in 1998.

“The Great Street,” a story by Ortese, translated by Henry Martin:
http://www.archipelago.org/vol1-1/ortese.htm

“Where Time is Another,” an autobiographical meditation by Ortese, also translated by Henry Martin: