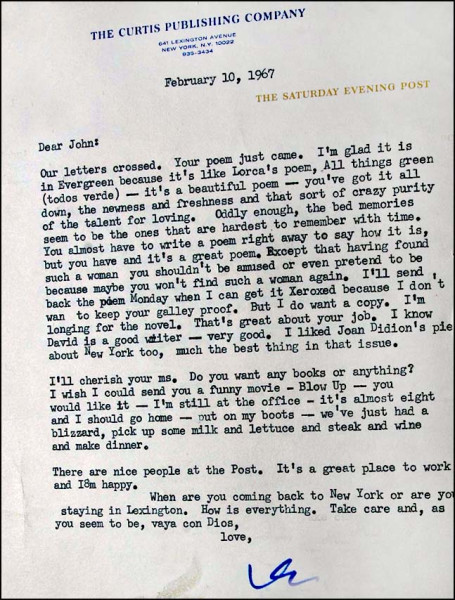 Lucy told Jack more about her great multitude of dear life-long friends, her numerous lovers, her mentors. For the most part she used only first names, as if somehow Jack would know who they were. Joseph, whom she had just alluded to. And Nadine. And Lev. Sid, Mike, Patty, Charlie. And Gloria, Mike, Arthur, and Joseph. And, of course, Mike.

Mike! Her prickly cactus, martinet, marvel. Her marlinspike, her darling boy! Since the departure to the Philippines of her husband, Charles, and even long before that, Mike was a truly important part of her life. She was a bridesmaid at Mike's first wedding, to Lizzie, at Lu Shu, his mother's country home, and she remembered the flower-banked altar in the sunken garden, and Lizzie’s gown. It was ivory satin with a close-fitting bodice, and a long veil of heirloom rose point and Brussels lace, which of course was worn decades earlier by her great-grandmother, Mrs. Longworth Carter.

She remembered Lizzie’s bouquet, too. A collection of camellias, gypsophilla, and bouvardia. The bridesmaids wore white taffeta with coronets of pink roses. Now, Mike was present at her wedding to Harry, sonny’s father, at the chantry of St. Thomas Episcopal Church, on Fifth Avenue at 53rd Street, in New York. Her gown was ivory-colored taffeta with a bodice finished with a heart-shaped neckline edged with heirloom rose point lace. Interesting, isn't it? That Lizzie copied it three years later? Guess who caught her bouquet? Mike, of course. Why? Well, to show the bridesmaids how to do it.


Currently Mike was World News bureau chief in London and Hortense, his second wife, was with him. Thank God he took that job, because before then he didn't know who and what he was. Sometimes he telephoned her, but most of the time she called him. Mike told her not to call him during business hours, and of course she couldn't call him at home at night because Hortense might pick up the phone. It was clear Hortense thought she was a man—Mike's animus actually, his despised self, and part of Lucy's own despised self as well!—which might explain why Hortense kept encouraging him to be friends with Ted, whose wife happened to be a Lesbian. But Hortense insisted her happiness was Mike's happiness, and that was good for Mike, but then she was turning into a fat lush.

Mike had one annoying habit that she couldn't ever get quite used to, and that was he hardly ever kept his appointments or dates with her. He may promise to be at The Four Seasons for lunch several weeks hence, confirm it, and then later she'd hear from his secretary, "Oh, so sorry, but Mr. Murphy must cancel because of other pressing business."

She didn't like this at all. It was untrustworthy, unreliable, and not worthy of her or of him. Lucy would never do that sort of thing, so why on earth should he do it to her? Mike would say, "as soon as possible," but it usually meant next year. Or never. It was a sign of his submerged anger. Toward her, toward his fearful father, toward everyone. "But since he refuses to talk freely about these things, he's just stuck with them! Along with his silences, he's reluctant to be kind or generous because he fears being exploited, taken advantage of. The rich man's curse, what?"

As for sex, well, Mike was absolutely insatiable. He always said—and she agreed completely—that one may have many sexual objects, but only one love object. Much of Mike's libidinous energy was tied up in numbers, beginning when his grandfather taught him fractions. He actually got an erection once when he read the Dow Jones Industrial Index. She witnessed it herself one time in the limo on a back road on Fishers Island.

But at the same time he was obsessed with business and politics and philanthropy. He surrounded himself with old men—former cabinet officers, senators, governors, corporate board members, all those dreadfully stuffy, pompous, humorless people. Why? Perhaps because they made him feel more important than he was, or because he enjoyed proximity to power. But all that to Lucy was so awfully boring.

"You know that last year Mike's father passed away. Mike was primary beneficiary, and got 71,555 shares of World News common stock. Millions. Millions. Millions! And Mike is determined to make at least another million each year to add to his fortune. Why? Well, why not?"

About this she was ambivalent. On the one hand he was an adorable man, ever so sensitive and vulnerable. On the other she often thought he would never sacrifice anything for love because he was incapable of loving anyone except as an extension of himself. As the son of a world famous, wholly work-driven figure who barely had time for him (ha, ha!), Mike was immersed in a contradictory morass of great privilege and cold neglect. He always got everything in the way of material things and comforts he wanted, but he hardly ever saw his father.

"Think of the narcissistic wounds that come from trying to move out of a truly great man's shadow! In that horrid circumstance how on earth can you expect one to form a mature sense of identity?"

Charlie Adams kept telling her he didn't understand how she could love a man like that. Well, maybe he was right. Maybe Mike was her invention, her creation. Maybe she was giving him all sorts of qualities he simply did not possess. She was quite good at that.

Mike had a close friend and business associate in Saudi Arabia, a sheik actually, who had palaces and sprawling villas all over the country, each with a harem of hundreds of girls. Eunuch staffers recruited them from elementary and high schools. Mike thought it was fascinating that the sheik reserved each Thursday for the deflowering of a virgin!

"A virgin every Thursday, can you imagine?"

This was right up Mike's street. He also was enormously drawn to pairs of women, and most exciting of all to him would have been a mother and her virginal daughter. A ménage a trios.

"But that happens to be every man's fantasy, no?"

Perverse? Perhaps. But various world cultures have vastly different ideas about what is proper and acceptable, and what is not. Don't you agree? You must read about Captain Cook in the South Pacific in the 18th century. The native islanders organized some entertainment for Cook and his ship's officers. They sat near a blazing campfire and were mesmerized by a naked six-foot Tahitian man insouciantly fucking a slender fourteen-year-old girl. The Captain later wrote in his log that neither of them was embarrassed—indeed, the young girl appeared to know exactly what she was doing and what's more she was thoroughly enjoying it.

Now, for a long time Mike was captivated by the idea of a ménage a trios. Mike, Mabel, and Lucy. He was obsessed with the notion. And he had the nerve to tell her that often she came on too strong to him, sexualizing the word "come," and he didn't even see the irony.

As Lucy rendered her endless rapid-fire labyrinthine monologues, Jack did not want her to think he was too lower-middle class, too conventional, or too contentious. He wanted to appear as worldly and sophisticated as she was subtly suggesting he might actually be. Plus, he thought her arguments were not wholly without merit. After all, look at the Polynesians in 1775! In their nakedness and open sexuality, they were a peaceful, fun-loving and happy people. That is, until the soldiers and pious missionaries put a stop to it and everything else. Rudyard Kipling nailed it perfectly:

"The wildest dreams of Kew are the facts of Katmandu, and the crimes of Clapham chaste in Martaban."

Soft lights, warmth, the faint echoing of Vivaldi. Rain made a rushing sound against the windows. Jack was on his fifth or sixth or seventh glass of scotch. Hell, He'd lost count, and his head was swimming. Lucy took both his hands, inspected them closely. Remarkable!

"Your hands are very much like Mike's. Beautiful long-fingered hands, like those of a sculptor, or a conductor, or an artist, or an architect. Did you know that if a thumb is shaped in the form of a waist—as opposed to being plump and straight—it’s a sure sign of high intelligence and artistry?"

No, Jack didn't know that, and he was enormously pleased to see his thumbs were indeed in that category.