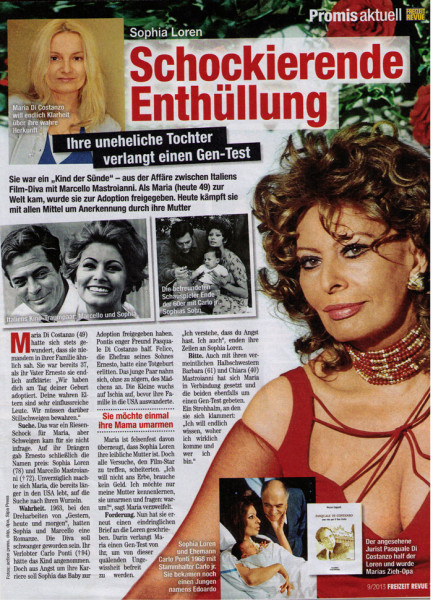 Her illegitimate daughter is seeking a genetic test

She was a “fruit of sin” – born from a love affair between the Italian diva and Marcello Mastroianni. When Maria (now 49) was born, she was given away for adoption. Now she is fighting with all means for her legitimation by her mother.

Maria Di Costanzo (49) had always been wondering why she didn’t look like anybody in her family. She was already 37 years old when her father Ernesto finally enlightened her about her origins: “We adopted you the day of your birth. Your real parents are very influential persons. We must maintain strict silence.”


The search. It was a huge shock for Maria, but she didn’t want to be silent. On her pressing, Ernesto finally revealed the names: Sophia Loren (78) and Marcello Mastroianni (died at 72). Maria, who has been living in the USA for many years, immediately began searching for her roots.

The truth. In 1963, during the shooting of the film “Ieri, oggi e domani”, Sophia and Marcello had a love affair. The actress should have become pregnant. Her fiancé Carlo Ponti (died at 94) would have liked to accept the baby. But in fear for her career Sophia gave her child away for adoption. Ponti’s close friend Pasquale Di Costanzo helped him. Felice, his eldest son’s wife had just had a still-birth. The young couple didn’t hesitate to take care of the little baby-girl. Maria grew up in Ischia until her family emigrated to the USA.

She would like to hug her Mom just once

Maria is absolutely convinced that Sophia Loren is her biological mother. But all attempts to meet the film-star failed. “I don’t want the inheritance, I don’t need money. I just want to meet my mother, I want to hug her and ask her: Why?” Maria desperately says.

Demand. Now she wrote a forceful letter to Loren in which she demands a genetic test in order to get rid of this torturing uncertainty. “I understand that you are afraid. I’m afraid, too”, Marias letter to Sophia Loren ends.

Request. Maria wants to get in touch also with her supposed half-sisters Barbara (61) and Chiara (40) and ask them to make a DNA-test. Maria says: “I finally want to know where I come from and who I am.” 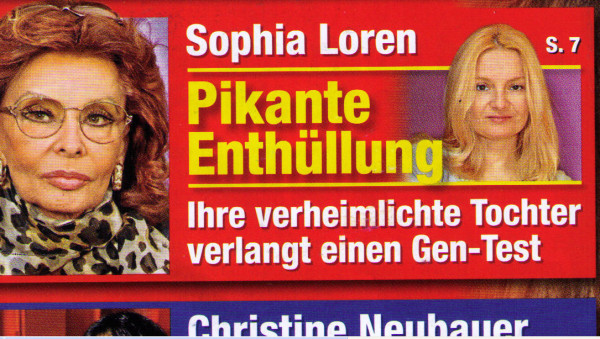 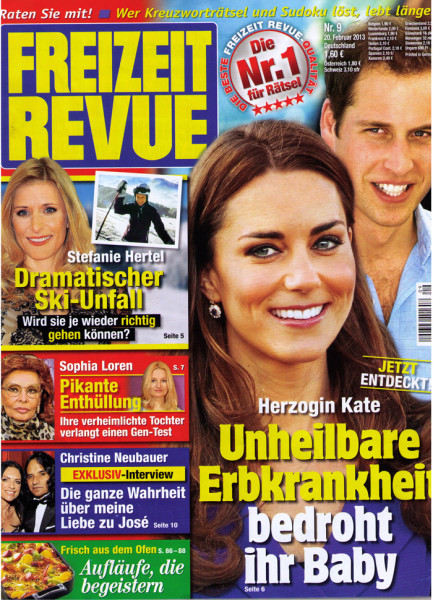