After an hour and a half of driving, we pulled into a parking lot on Bethlehem, PA's Sand Island Park, underneath a huge steel bridge.

She led me along a narrow path alongside the wide, shallow Lehigh river to our right and a boat canal on our left. Finally we picked our way through a stand of leafy bushes on a steep slope, down to the riverbank. She ordered me to get out my camera, and to stand--"Right there!"--near the water. Then, without a further word of explanation, she took off her sneakers, blouse and shorts, and sat down at the base of a massive sycamore.

She put her elbow on her raised knees, hand under her chin. Spreading beneath her were the sycamore's tangled roots, which had been exposed by a recent flood. To the left was the glistening river, and across it a splendid view of the rusted buildings and tall stacks of an abandoned steel mill.


I double-checked my f-stop and exposure. Made sure I was focused tack-sharp. Didn't want to mess this up.

"How did you find this place?" I asked.

She replied that one of her many cousins had brought her here a few months earlier, and she'd immediately found those exposed, writhing, snake-like sycamore roots fascinating.

"They have to mean something," she said. "Maybe like this huge family I'm all tangled up in."

After two or three hours in the darkroom that evening, I called Maria.

"I've got some fabulous eight-by-tens to show you. I mean they're truly gorgeous. You at the base of the tree. A shot YOU pre-visualized. All I did was follow your direction. You're an artist! No question about it."

She was silent for a few moments. Then: "You're just saying that because you love me."

I immediately launched into a wordy rant, as I'm wont to do. To the effect that, yes, of course, I can't help but to project positive traits onto the woman I love, but in this instance I have before me irrefutable, empirical evidence of your compositional and pictorial skill. It wasn't an accident, a lucky shot. You'd composed the shot long before we got to the river. All the best photographers are expert in this sort of pre-visualization. You knew what the image was going to be before you directed me to point the camera and press the shutter.

"Come on, admit it," I said. "You haven't mentioned it before, but I'm sure you have a camera. And you love to take pictures. And you've taken a lot of them, right?"

"What kind of camera?"

I laughed. The old Canon vs. Nikon fight. "I knew it! So tell me, why are you into photography?"

"Because I see things they don't."

"My two older brothers, younger sister, my mother, my father. They can't understand why, for instance, I took a close-up of a cabbage white butterfly on the grille of a Mercedes at a relative's wedding in Tuscon. It's like they want me to see only what they see, because they are always right, and I'm always wrong. "

"Ignore them. They have no clue. So when can I give you these prints?"

"Keep them at your place. If Auntie finds them in my room, she'll be shocked and ask me how could I could do such a sordid thing like getting naked out in public? And exactly who took them, huh?" 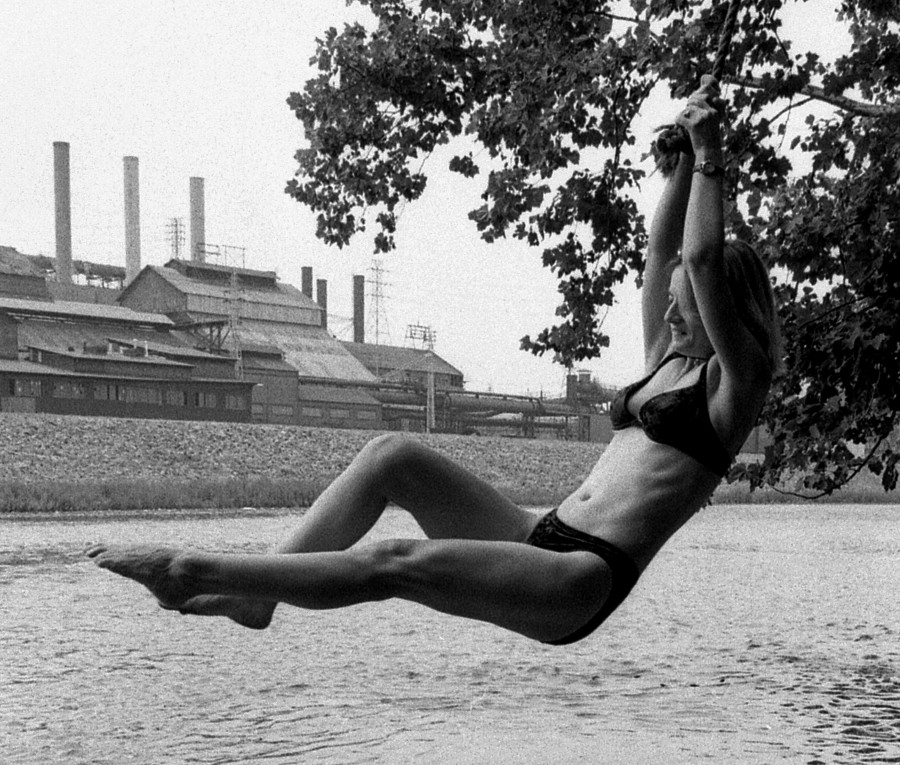 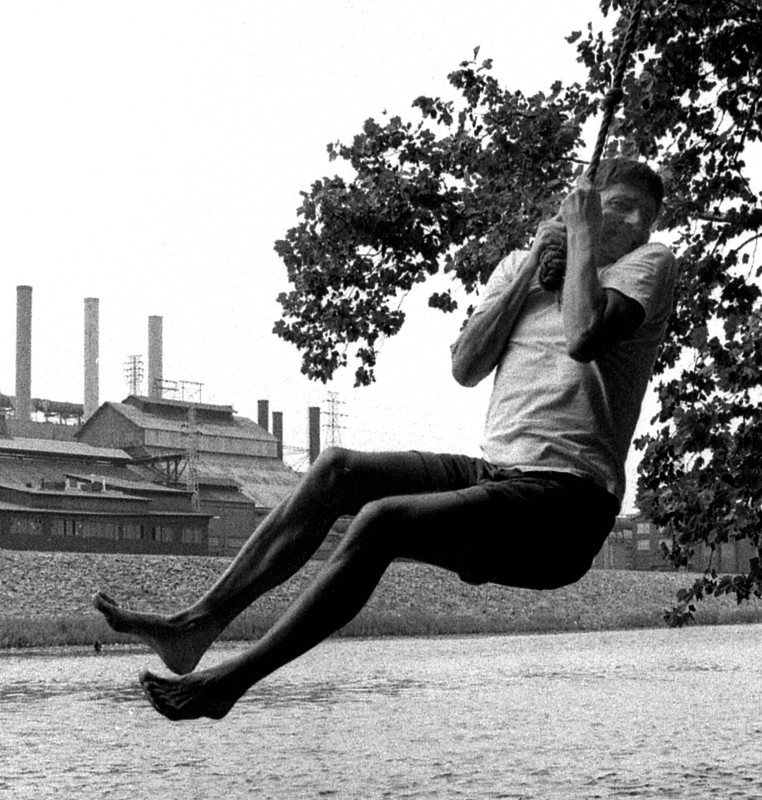 That night, in bed, trying to fall asleep, I wondered: Was my growing love for Maria clouding my judgment? Could I possibly claim to be fully objective? What would others say about it?

I leaped out of bed. Didn't take me but two minutes to copy and send Maria's image to PhotoForum, an internet gallery run by Andrew Davidhazy, Professor of Photography, at the Rochester Institute of Technology. On this list was a gaggle of professional photographers in New York and the west coast and Europe, who never hesitated to fully express their like--or profound dislike--of the pictures displayed in the gallery.


A week later, I had a collection which I copied and pasted into a lengthy email. I needed Maria to know what others--besides love-struck John--saw in the image.


"A nude woman sits in a sylvan setting. Across a river, there’s a factory. Her face seems melancholy or wistful, maybe dejected. To me, this could be about the feminine spirit of Nature (Gea) and how man’s works have failed to integrate/consider the natural world. This is a complex composition, and the author has managed its components expertly. The weighing of the two “halves” of the image for emotional impact was critical. Mask off even a tiny bit off each side and see how it shifts.

"The sylvan side is sensuous, textured and rich with depth, while the factory side is kinda flat and nondescript. I like those foreground roots, which brought to mind Eliot’s poem…

What are the roots that clutch, what branches grow
Out of this stony rubbish? Son of man,
You cannot say, or guess, for you know only
A heap of broken images, where the sun beats,
And the dead tree gives no shelter, the cricket no relief,
And the dry stone no sound of water. Only
There is shadow under this red rock,
(Come in under the shadow of this red rock),
And I will show you something different from either
Your shadow at morning striding behind you
Or your shadow at evening rising to meet you;
I will show you fear in a handful of dust.

"Note the black halo around the model’s head, how it emphasizes (through tonal contrast) her head/face. It keeps her from getting lost in the image."

"Compare this waterside image with those made by the Impressionists. This image appears to be a composition in Photoshop. What attracted me to it is the idea behind it. You have the usual symbol of the river of time flowing between banks, one is urban, the other is nature’s. The human figure is portrayed in nature’s realm. B&W is used to contrast these elements."

"The figure appears to be a nude, no longer a girl. She is drawn to herself, her leg and arms supporting her head in a thoughtful posture. It is a rather painterly construction. Were the figure dressed, what might the viewer’s reaction have been?

"The French Impressionists liked this type of environment and I have no doubt that it inspired the photographer. Here we are in the realm of ideas, so my review poses the question of relationship. The figure, being nude, is exposed to her conscience.

"The truth of her life. The photographer, as the artist, hopes it is a universal candid statement. The natural setting says: Am I the last resort of someone whom time is threatening? I don’t fear time. I always exist. If you stay in my domain you are of me. You associate yourself with me.

"A tree, like the nude, wears no foreign garment. So the parallelism continues. The lighting picks out the tree and the figure in the same way. The background has been darkened in PS to isolate the figure and the foreground trees; and hide the object or prop on which the figure is seated. This latter dark-fill editing tends to make the figure too formal and isolates her from her surroundings. And the technique reveals itself. Which is a no-no in my view of photography. It takes away from the unity of the idea. Even composition in PS must be thorough. It must not be used to hide, but to reveal."

"The black border infers that the photographer has used a full negative and that this isn’t a PS job. I hope that’s true, because I like the fresh air of location in which all living beings that participated interacted at a particular moment in time. Then the fact that the author used a model doesn’t detract from the aura of the image. She was there!"

"Bob, I am quite sure that the woman in this photograph is not nude. On my 15” Mac monitor she appears to be wearing a black bathing suit. BTW, the image to me does not appear to be a composition in PS."

"This is reminiscent of Charles Sheeler, a Philadelphia painter and photographer, who was involved in the Precisionist movement of the 1920s, which included Charles Demuth, Ralston Crawford, Preston Dickinson, Niles Spencer, and Georgia O’Keeffe. Precisionism is regarded as “cool” art, which keeps the viewer at a distance. Sheeler had the notion that the artist ought to be detached, and not given to much social criticism.

"Sheeler saw in industrial landscapes something religious. Indeed he is the iconographer for the religion of technology. His paintings avoid the organic, the living. Humans are present only to provide scale. Sheeler believed the world is in your back yard, if only you have the eyes to see it. His backyard, though, consisted of factories, mills, and cityscapes. The inorganic."

After I sent Maria this impressive collection of comments, I thought: When credit is due, by god it ought to be given!