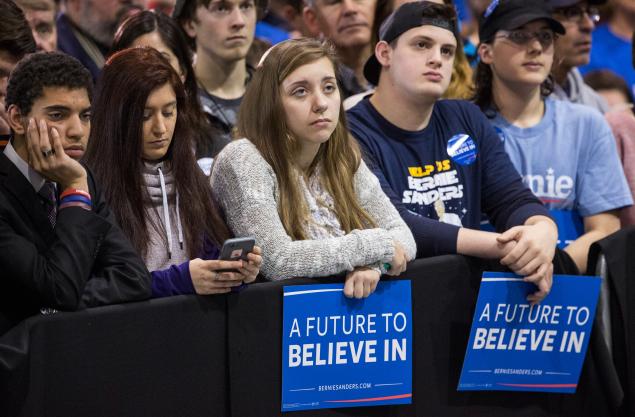 A few words about the cold call I got yesterday from a Bernie Sanders campaign worker. He clearly was an eager, passionate young man. He did very well for the first few minutes¸ trying his best to change my mind about voting for Hillary. "This woman takes money from big business and is in their pockets," he said. I replied that wasn't a big surprise because ALL politicians fit that description.

I said I intended to vote for Hillary on Tuesday because I want her victory as a payback to the obsessive, ignorant and mis-informed Republicans who grilled her all day about the non-existent Bengazi "scandal." Also I recall Republicans' absurd attempts to impeach Bill Clinton, who went on to great accomplishments, not the least of which was a surplus rather than a deficit.

"I despise Republicans," I said. "That's why I'm a yellow dog Democrat."

"I'll vote for a goddamned yellow dog before I vote for a Republican."


The kid came back with some stuff about our desperate need for NEW leadership, following the seven years of huge disappointments Obama has brought us. And I scoffed. "Obama happens to be the most productive and successful president in DECADES," I said.

"Well," The kid said, "there are a lot of things he promised but DIDN'T do."

I laughed. "And precisely why is that, huh?"

He grudgingly acknowledged there has been universal Republican obstruction from the moment Obama was sworn in. And what's more, Republicans ignore the fact that Obama found and killed Osma Bin Laden, installed Obamacare, etc., etc., etc.

In the conversation the kid in passing referred to me as a 74-year-old. Which surprised me. How did he get that information? Then he asked me if I had access to the internet. I said yes, which seemed to surprise the hell out of him. I imagined him wondering, Wow, how can this feeble nearly senile old geezer manage to do that?

"You know," he went on, " it's really, truly important for you to gather as much information as possible, so that when you vote on Tuesday, you'll be more likely to make the right choice."

Which was his not so subtly suggesting that, despite my claim of internet use, I was nevertheless woefully, and vastly uninformed. In other words, old geezers like me need young people like him to help me figure out what's what.

P.S. September 26, 2016. Just came back from voting for Hillary. Well, now. Another historical moment. I lived long enough to vote for the first African American for president, and now I just voted for the first woman. I guess the only category still to go is a gay man or woman. USA! USA! USA!